The tree is a digitised version of the physical entity, separated into three parts: Crown, trunk and root system. It is comparable to an electrical mast object, which in return is composed of an armature, mast and foundation part. Each part of the tree object have different sets of properties for geometry and information, used for different purposes in 3D model analysis. The crown yields shadow; both the crown and trunk may obstruct view and access; while the root system may interfere with technical installations below surface. 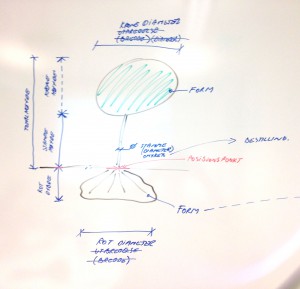 A separate tree is represented with an insertion point that should be defined in the same manner in all modelling tools for the profession, as the point will be referred to by other objects in relation to the tree. This point can define the relationship between the tree itself and the surface composition it is placed into. The height of the tree in relation to the surface should be controlled by the surface elevation, similar to other outdoor objects in the model. A proposal for an insertion point can be center of the crown/trunk in the point where the tree trunk meets the top of its target surface. Notably, in many cases the tree will have a layer of topsoil around it in soft surfaces or vegetation areas, while it will have an immersed area by the trunk covered by a protective frame on hard surfaces. To have a common level of insertion in both these cases, one could agree to have the object insertion point in the center of the tree trunk where it meets the elevation of the adjacent main surface.

A tree should be able to be modelled as a point for singular entity, as a row/avenue or as a defined area when mass planting. This arrangement is done in 2D, while the object elevations are controlled by the target surface.

2 comments on “The tree”